On The Development Of Key Av7 Players

SS plus Fend plus Frenzy is mighty potent.

Juggernaut does open up some interesting things, Aka side line shenanigans. No-one is safe there anymore. Pushing stinky SF dorfs (or similar) of pitch is great fun! The threat that you aren 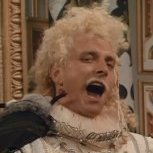 piling on always, pomb is the second best thing in the game only bested by claw pomb. getting it on a elf team is the best and she already have frenzy and jump up.   sure she will get fouled